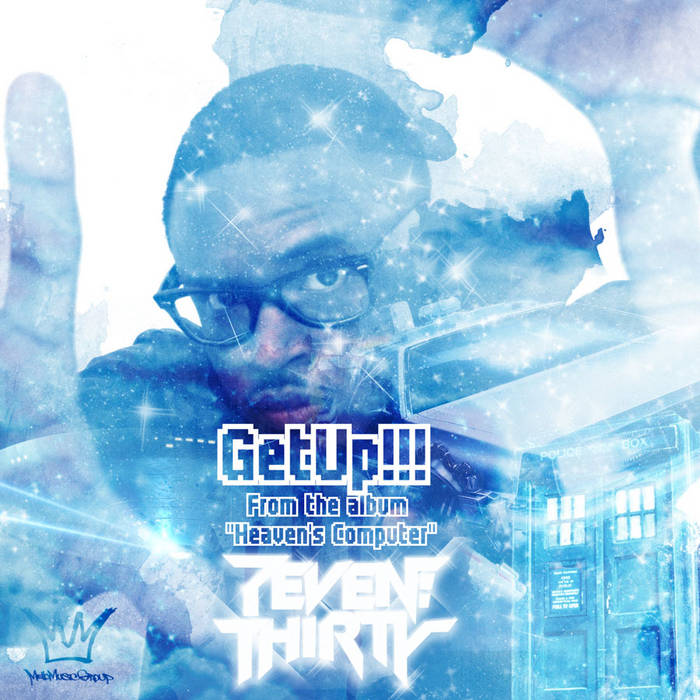 From the upcoming album "Heaven's Computer" (9/25)


Jackson, Mississippi is not immediately known for producing MC’s influenced by Wu Tang Clan, A Tribe Called Quest and Digable Planets as well as who navigate concepts about alternate worlds and time travel yet one emcee is changing that. 7evenThirty is too raw for this planet.

Whether this is your introduction to 7evenThirty or you’ve heard his past underground material, pinpointing this alien’s origin is no easy task. “GetUp!!!” finds this microphone extra-terrestrial standing out amongst the regular degular everyday life. Ruthless rhymes mixed with “time-travel and zappin’ n****s” is a particularly curious formula that requires a particularly eccentric mind to pull off right. 7even takes us from the funkiest corners of the South to the illest galaxies in space. Swedish beat wizard Erik L crafts a spacey, thumping electronic bass line that serves as 7even’s launching pad.

Though at any moment he can beam up in the mother ship, it seems 7evenThirty is confined to our planet for the time being. The official arrival, Heaven’s Computer, crash lands on September 25th via Mello Music Group.

[Verse 1] Who the fuck is that n*gga/ Lookin‘ Like some kinda neo-retro rap n*gga/ Bopping like got a pair of headphones on, banging a beat/ But he don’t, I think the man trippin’/ What kind of glasses are them/ Look how his pants fit him/ he looks way too hip hop to be a damn hipster/ Maybe he’s an artist/ Probably comes up with dumb rhymes/ He comes across like he’s been weird for a long time/ Look lie he act crazy/ Look like he been a little spazzed since the actual 80’s/ Since highchairs and babies/ His mama probably figured that he had the ADHD/ But never medicated so he just kept creating/ Damn this n*gga’s a mess, ain’t he/ I mean look at the kicks, shits is fresh ain’t they/ Look like at any moment he could beam up in the mothership/ Rockin’ SB’s, but he don’t skate or nothin’, what’s up with him?

[Hook] These dumb suckers wish they had me all figured out/ Wiggin’ out how we got the croud flippin’ out/ They like lookin’ n*ggas all in the grill/ Either get down, or get the fuck outta here/ You gotta get up, get down, or get up out my face n*gga [4X]

[Verse 2] Who that cat, yeah he wilds out/ Yeah that’ that rapper I be tweeting online ‘bout/ 7even Eleven, or something dealing with time/ I don’t know truthfully but he’s rather ruthless in a rhyme bout I found out/ he used to rap ‘bout stabbing and clappin’ n*ggas/ But now he’s all obsessed with time travel and zappin’ n*ggas/ Or something weird always coming out of his mouth/ And he don’t really sound like he comes from out of the south/ 7even Tré Oh/ How come you ain’t say so/ yeah I got his old shit, I’ve just never seen his face though/ This n*gga sounds like a giant on records/ And he’s so spaced out, the planets move when he say so/ I heard he just dropped another EP/ I ain’t got to hear it yet, but I know it’s somethin’ sweet/ And it’s produced by some homie from over seas/ And supposedly, he’s Obi Wan Kenobi on the beats

[Verse 3] Look at these two geeks trying to be low key/ And it’s obvious they over there talkin’ ‘bout me/ I just keep boppin’ my head and acting like I don’t see/ But they staring too hard, they need to get they own sneaks/ I don’t know who they think I am/ I am not who they think I be/ That n*gga ain’t me/ I ain’t the 7 to the 3/ I don’t be murdering beats/ I ain’t no outer space freak/ I ain’t no strange being/ Aliens don’t ever speak to me/ I can’t be who I am and still get respect in the streets/ I don’t end no beef/ I don’t be reppin’ MZD/ You’s invading my space, I wouldn’t rock you in the face/ My n*ggas don’t pop them “thangs”/ I ain’t as strange as they say/ Dropped the LP, and they said it sounded like Dré/ Out came the mixtape, said it felt like Jay/ Cause you see part of it’s an artist is inspired by the greats/ But at the end of the day, Tré just gotta make ‘em pay

Little Brother joins the show to discuss their beautiful journey, plus tunes from Fat Tony