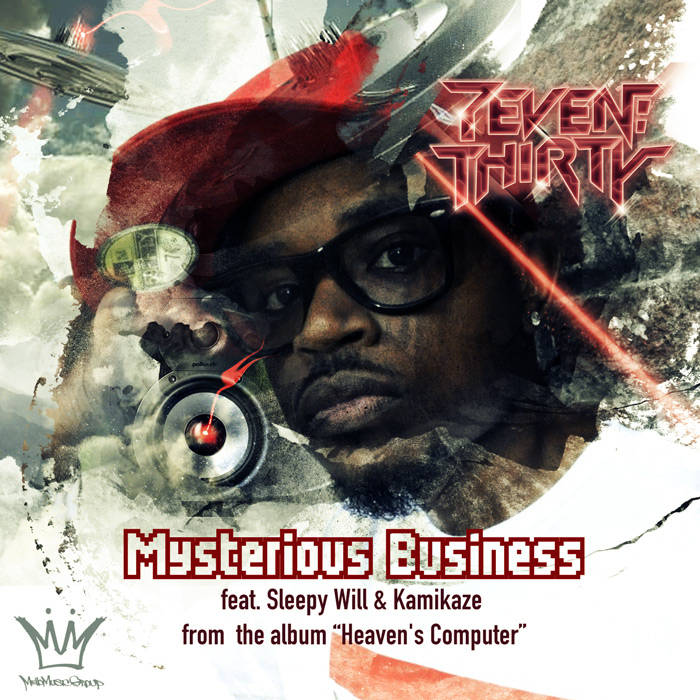 Surviving in hip-hop is easy, you have skills and you have beats, the rest falls into place, right? If only it were so simple. Mississippi firebrand 7evenThirty takes a break from demolishing civilizations to shed light on the harsh climate of rap music on a leak from his upcoming concept album, Heaven’s Computer.

“Mysterious Business” tackles the question of sustaining within the realm of professional hip-hop. Erik L’s beat is an ominous, brooding arrangement that could be equally at home as the soundtrack to a 80’s video game dungeon level. 7even appears as a weary rhymer, jaded and disenchanted by the ups and downs of the indie grind, he closes his verse with the poignant question: “would you do this shit for free?” Partners Sleepy Will and Kamikaze (some folks may know Kamikaze as 1/2 of the Jackson bred duo Crooked Lettaz) both hit it out the park. Detailing the plight of the independent artist and underscoring how all MC’s are selling something, the two MC’s spit convincing bars without coming off bitter.

[Verse 1 - Sleepy Will] I’m leanin’ back/ Thinkin’ bout the game/ tryna stay ahead/ Of constant change/ Was a young n*gga/ Just like you/ Immo sell this dope, fuck hoes and rap too/ It ain’t hard, make a million dollars off a verse/ buy that Maybach, supply the whole hood wit work/ They don’t don’t tal about it/ This just entertainment/ Yeah, it’s all for show/ Most of these n*ggas famous ain’t never seen a reignment/ N*ggas like you and me/ We don’t get them placements on MTV/ That’s just how it is/ Well you just independent/ Fuck what them haters say/ N*gga, I’m still the business/ I put in work/ From the crack of dawn/ To the crack of dawn/ For the perfect song/ Most of y’all n*ggas ain’t never put it work/ Never hit the block/ And made them feet work/ If it was that easy, we’d all be rich/ Expensive taste/ Exotic bitch/ It’s all politics/ A fuckin’ campaign/ Turn on the radio, the fuckin’ same names/ Original?/ What the fuck is that?/ It’s all format/ With corporate cashin’ checks/ What happened to the vets?/ Never had a mentor/ To guide me down the path/ So I live by the sword


[Verse 2 - Kamikaze] I hate rappers/ there I said it/ So don’t be actin’ like we cordial, all copacetic/ Telekinesis says you “meeses” are simply pathetic/ I don’t play favorites, anybody that’s spittin’ can get it/ You factory/ Straight off assembly lines/ You’re double-faulted with them corny ass wimbledon rhymes/ Dancin’ like an extra, Michael Jackson’s Remember The Time/ probably why you wack and why ya pockets are slimmer than mine/ Oh, it’s about the lyrics?/ It’s not about the cheese?/ Them why you up on iTunes, tryna sell us cds?/ Peddlin’ ya merchandise, talkin’ bout all ya degrees/ You tryna get rich off of raps, just like all of the G’s/ And all of the playas/ And all of the thugs/ And all them cats that’s talkin’ ‘bout trappin’ and sellin’ them drugs/ Ya sweater’s too tight, ya jeans are uncomfortably snug/ I'm Posdonous with a pistol, you rappers get plugged/ One


[Verse 3 - 7even] I feel like giving up/ My temper sucks/ If you didn’t know that, you didn’t know me that well, listen up/ Sometimes I get kinda tired of re-writin’ lines and/ Gettin’ caught up in this hype and trying to survive in/ A game where a million other n*ggas do what you do and they all claimin’ that they hot shit/ What makes you the top pick?/ Let ‘em know yo name/ Make ‘em respect yo gangsta/ Stay “piece”/ But keep bangers in the chamber/ Fuck the rest/ Always out-do ya best/ And when you write, try to master saying more wit less/ See, rappers want for n*ggas to caress on they finesse/ But see they all got ghost-writers/ I guess they just possessed/ N*ggas turn to gods/ They record sold the best, but if you asked what’s on they mind, they never speak in golden text/ I give a fuck about a viewers’ choice/ ‘Cause all I view is moist/ No need to speak further to prove a point/ Yo main concern is giving yo’self the extra push, Ju/ Mastering your craft/ And push back when they push you/ Gone ‘head, let a hater talk, you need them n*ggas too/ ‘Cause they ain’t gone be shit anyway/ Too busy focused on what you do/ Keep the needle in the groove/ When you need to stick a move to MC’s/ Strike ‘em in the heart, twist ya wrist and pull/ That’s just some shit that you would do if you was me/ Biggest question you should ask is, “would you do this shit for free?”